If you've ready any of my recent posts on this forum you'll know I've taken on a 1977 2500 project - I bought the car from a local guy who saved it from being scrapped by an aquaintance who I believe had used it as a parts car for its engine. The engine was replaced and I bought the car shortly after.

The shell is very solid, although there is a 10cm area on the nearside front 'chassis' leg (or whatever you call it on a monocoque) which will need patching and the boot lid has rusted through. The headlining has a huge rip across its entire length and will need replacing and the dashboard has about 6 large cracks across it. Being an Aussie car, it's painted in a fairly grim silvery blue metallic (a Toyota colour) and what's actually left of the paintwork is cracked and peeling significantly. Where the paint has peeled off there is surface rust.

Due to a stroke of luck I recently became aware of a breakers yard who had taken in a different 2500 (an S) from an elderly fella who just didn't want to go through the hassle of selling it. The car hasn't seen the road since the mid-2000s but has been garaged throughout this time. Long story short - I went to see the car and just had to buy it. The body is in equally good condition to my existing car - a couple of minor rust bubbles on one sill (which I know will end up being a bit worse than it looks) but the arches, underside etc are very solid indeed - it passed the magnet test with flying colours. The car is painted in white which is much nicer than the silvery blue of my existing car, and being an S rather than a TC it's got power steering, overdrive and even factory aircon (condition unknown). It's very original and has all of the factory warning labels under the bonnet, on the boot lid, inside the glove box and on the rocker cover etc plus a completely unused spare alloy wheel. 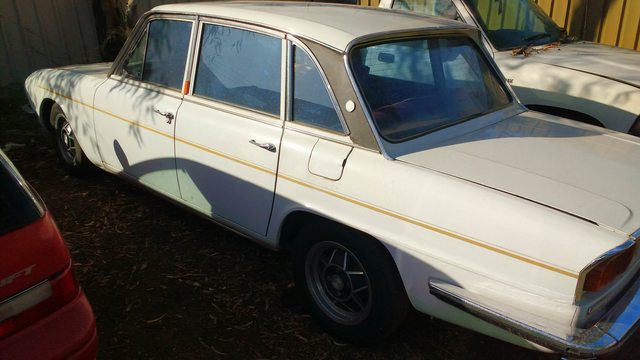 In all this is much, much less of a project than my existing car. It needs some work but it could be very presentable, very usable for not a lot of time or money.

The silver car could also be very usable - it is on its way to being mechanically sound and I have been able to source new seats for it which have helped lift the interior considerably. The carpet has cleaned up well. However, in truth I hate the colour which doesn't suit a 70s British car at all - it ideally needs a full-body engine out respray in order to change it, I can't envisage a point where I will have the time and energy to do this myself, or the money to pay someone else to do it. The other big jobs which I am not particularly keen on undertaking are changing the headlining and dashboard. These key three areas really let the car down and I don't think I'll ever be truly happy with the car unless they were done.

Very temptingly, everything the white car needs to be almost perfect are in/on the silver car - the seats, the door cards, the carpet, the offside doors (looks like both of the ones on the white car have seen some filler at some point), new brake master cylinder, pads, slave cylinders and shoes, rebuilt dizzy and rebuilt carbs, a nice set of S alloys and brand new tyres plus a few other bits of trim etc. It would be a couple of weekends' work to transfer this stuff to the white car.

Whilst both cars are currently on my driveway I really don't have room for both of them. Plus, with a new baby I don't have the time for two projects. I will definitely keep the white one but am in a bit of a moral dilemma about the silver one.

Do I sell it as-is, as a viable project for someone who's got the time, energy and money to make it good (and ideally has the skills and time to strip and respray it themselves) - but leave me in a position where I will need to source a lot of parts over a long period of time to make the white one A1 (it's really not easy to find parts in Adelaide and it's expensive to get them from interstate) or, do I bite the bullet and cannibalise the silver one for its good parts and leave it as a fairly unviable project for anyone else? That course of action would either lead to me trying to sell a largely stripped shell which, if not possible given the limited Adelaide market, would mean it would be scrapped

If I did cannibalise it I would have a great and free source of spares for the white car and if the shell was going to be scrapped I could even cut some common repair panels from it for potential future use.

Everything tells me using the silver car as a parts car is the most sensible option but I feel quite bad in condemming a still-viable car to the scrapyard.

Over the years I have wrecked several 2500's. I bought them cheaply at the time, got a recently recon'd motor and a couple of overdrive gearboxes this way. Over here, unfortunately there is no longer much interest in our cars with so many Jap cars available cheaply.
I think you must do what you want to secure good bits for your S. If you're unable to store body bits get rid of what you don't need. I've had similar problems with storage and if I didn't want my place looking like a tip have had to dump a lot of stuff.
Tony.
1976 2500 TC. converted to S specs.

Users browsing this forum: No registered users and 3 guests